Sea turtles are fascinating creatures. They are born under ground (under sand to be more accurate). Then they find their way to the surface, and to the ocean, after which they start a life filled with many dangers, where only a few will make it through the growing years.

As I wrote in my earlier post, I had an opportunity to visit Kosgoda Sea Turtle Hatchery recently. It was perfect timing, there was a batch of eggs hatched previous day. Guys that run the hatchery were planing to release some of them back to sea on the same day we visited. Releasing baby turtles was a very unique experience. And there is nothing like holding a baby turtle in your hand.

Unfortunately, I don’t have much images to show. We were too busy chasing baby turtles that are going the wrong way, as well as chasing away  falcons who were looking for an easy meal. 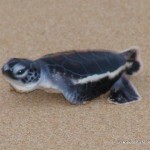 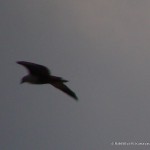 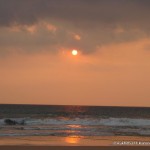 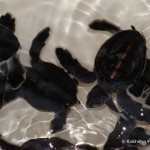 When we arrived at Kosgoda Sea Turtle Hatchery, there were tiny sea turtles in the tanks. From the staff we got to know that they hatched last night. Guys at the hatchery were going to release them around 6:30 in the evening. Since we wanted to see how it is done, we were asked to come back at that time.

It is important to note that the hatchery is closed at this time. If you want to take part in releasing baby sea turtles, I think its best to talk to the guys at the hatchery to find about date and time of release. Make sure to let them know that you are coming. And you have to come on time. I’ll tell you why.

Releasing baby sea turtles back to sea is not as simple as you might have seen on TV. First, you must know a thing or two about baby sea turtles. Specially, how they manage to always find ocean when you put them on the sand. The fact is, they don’t. Specially when there is light. They follow the light and move towards the brightest horizon. Therefore, you have to release them when the brightest horizon is at sea-side. That means, if you are in a west coast, you have to release them at sunset. If you are in an east coast, you have to release them at sunrise. I am not an expert about sea turtles. But that is what I figured out, based on few websites, and what the guys at hatchery said. Since they follow light, having artificial lighting, or light pollution around the area of releasing will be deadly. In natural environment, once baby sea turtles hatch, they has to cover some distance across the beach to reach water. This exposes them to many dangers. But when they are released by humans, they are released as close as possible to the water.

Kosgoda sea turtle hatchery is located in west coast of  Sri Lanka. Therefore, release is done at the evening. But you should not wait till it’s too dark. Because there is Galle Road and buildings nearby. That means artificial lighting and light pollution. You have to make sure, baby turtles has time to travel a reasonable distance in the ocean, before lights are turned on. Because sometimes, they get washed back to beach by strong waves and start following light. But you can’t release them too early ether. Because baby sea turtles has many natural predators. If you release them while birds are still out there hunting, you are only feeding the birds. This is why timing is so important. Not too early, not too late :).

Following is how it went, when we were there to release baby sea turtles. We arrived at the place 30 mins early, because we were afraid that these guys might release them without us :). And we waited until it’s dark enough, but not too dark. There was a staff member at Kosgoda Sea Turtle Hatchery named Rasika. He was the guy who guided us through the process. Around 6:30 PM, We took some of the baby sea turtles in to a bucket and took them to the beach. They were green turtles. Once everything is ready at the beach, we scanned the beach and sky to see if there is any predator. You also have to check nearby trees, but you can never be sure that it is safe. Number one predator to look out for is falcons. You also need to check if there is any artificial lights. According to Rasika, sometimes, they get the police to instruct nearby buildings to turn off lights. Once the safety is satisfactory, we started taking baby sea turtles out of the bucket and placed them on the sand one by one.

You have to be very careful when you hold baby sea turtles in your hand. These little guys get very active when they sense water nearby, and start flapping their flippers like crazy.  Because of this, you have to hold them very carefully. You can easily drop one. You must also remember that, just like the skull of human babies, shell of baby sea turtles is not that solid. If you apply too much pressure, it can get deformed. A deformed shell is a permanent disability. If you visit Kosgoda Sea Turtle Hatchery, you will see one such turtle with a deformed shell, due to improper handling when it was young.

Once placed on the beach, most baby sea turtles started moving towards water, flapping their tiny flippers. Few strayed other directions and we had to turn them back towards sea. Even though we carefully checked the surrounding environment, once baby sea turtles are on the beach, a falcon showed up out of nowhere. We had to run around to collect baby sea turtles that were already on the beach, and put them back in to the bucket. But few had already gone some distance in water beyond our reach. All we could do was throwing stones at the falcon. Unfortunately, despite all our efforts, and very rough sea, falcon managed to pick one baby sea turtle off water and flew away to a nearby tree :(.

Well, that’s the ugly truth about nature! One has to die in order for another to survive. There is nothing beautiful about it. Most baby sea turtles that hatch from these eggs will not make it through growing years. Some comes back to land following artificial lights, some get eaten by predators, some get trapped in fishing nets and end up in someones meal. Either way, only few will survive. However in our case, death of one baby sea turtle created a small safety window for rest of its brothers and sisters. Falcon went away to eat its catch, and we made sure that, all the other baby turtles travel a safe distance in to sea before the falcon show up again. According to this article about Baby Sea Turtles, in natural environment, without hatcheries like these, only 0.001% of baby sea turtles will reach the water alive after hatching. Rest of them get eaten by predators, as soon as they emerge from sand. In our case, only one died. Human intervention significantly improved their survivability. That’s definitely something to be happy about. But for that one who died, there is no difference.

If rest of the baby sea turtles manage to stay alive out there, they will come back to beach they were born to lay eggs in about 30 more years. And the circle of life will continue. Yep, that’s how long it takes a sea turtle to grow.

Overall, it was a great experience. There was some guilty feeling about the one that died. Even though it’s the way of nature, you can’t avoid feeling responsible for it.  If you like to release baby sea turtles yourself, contact Kosgoda Sea Turtles Hatchery and find out date and time. Probably they do it often, I don’t really know. I forgot to ask. And be there on time. You don’t want to kill baby sea turtles due to lack of punctuality, do you?

This is all I got on this topic. This post was put together in a bit of a hurry. Hope there are no mistakes in it.